High-intensity focused ultrasound can be used to treat people with pathological tremors. The Geneva University Hospitals are the only center in Romandy to offer this new technique.

Until today, to calm the tremors, there were drugs or deep brain stimulation: electrodes implanted in the brain that required strong neurosurgical intervention.

The benefit of ultrasound is that it can act on the area that generates tremors without the need to open the patient’s skull. About fifteen people have already received this treatment with very encouraging results.

Neurologist Vanessa Fleury, head of HUG’s movement disorders unit, implemented this technique in Geneva with her colleagues. At the microphone of CQFD, she explains what happens in the brain of a person who suffers from tremors: “The pathophysiology of tremor is still being elucidated. But, in general, we have cells in the brain that discharge repeatedly and produce tremor” . .

And depending on the pathology, they are in other regions: “For example, in Parkinson’s, these are the cells that are in the basal ganglia, gray nuclei deep in the brain. These cells that generate the tremor will unbalance the brain networks. structures and disturb the movement and precision of gestures”.

In dark blue and light blue, dysfunctional networks in tremor: 1. continuous movement pattern disorder; 2. Disorder of fine adjustment of voluntary precision of movements. In yellow, possible targets for the treatment of tremor: the most frequent is the VIM, the ventral intermediate nucleus of the thalamus. [Vanessa Fleury – Hauenberger et Hallett, New England of Medicine, 2018]

The cause is unknown but a genetic factor is suspected: “It is a family disease,” specifies the researcher.

The treatment takes place in an MRI exam room and lasts a few hours. The immobilized patient wears a helmet made up of 1024 sources that emit converging beams of high-intensity focused ultrasound to a strategic point deep in the brain, in the thalamus.

“The temperature of the tissue will increase, what is very interesting with this technique is that it can be controlled. At low temperatures, below 40 degrees, this does not cause damage”.

By raising the temperature to about 50 degrees, doctors will obtain a temporary therapeutic effect: “This will allow us to assess whether we are effective or whether we are causing deleterious effects. When we are sure that we are in the right place, we will do it.” heat strong enough to induce a kind of small burn and make an injury of a few millimeters”. Only the tremor-generating cells are eliminated in a controlled manner.

>> The lesion obtained by the ultrasound burn: 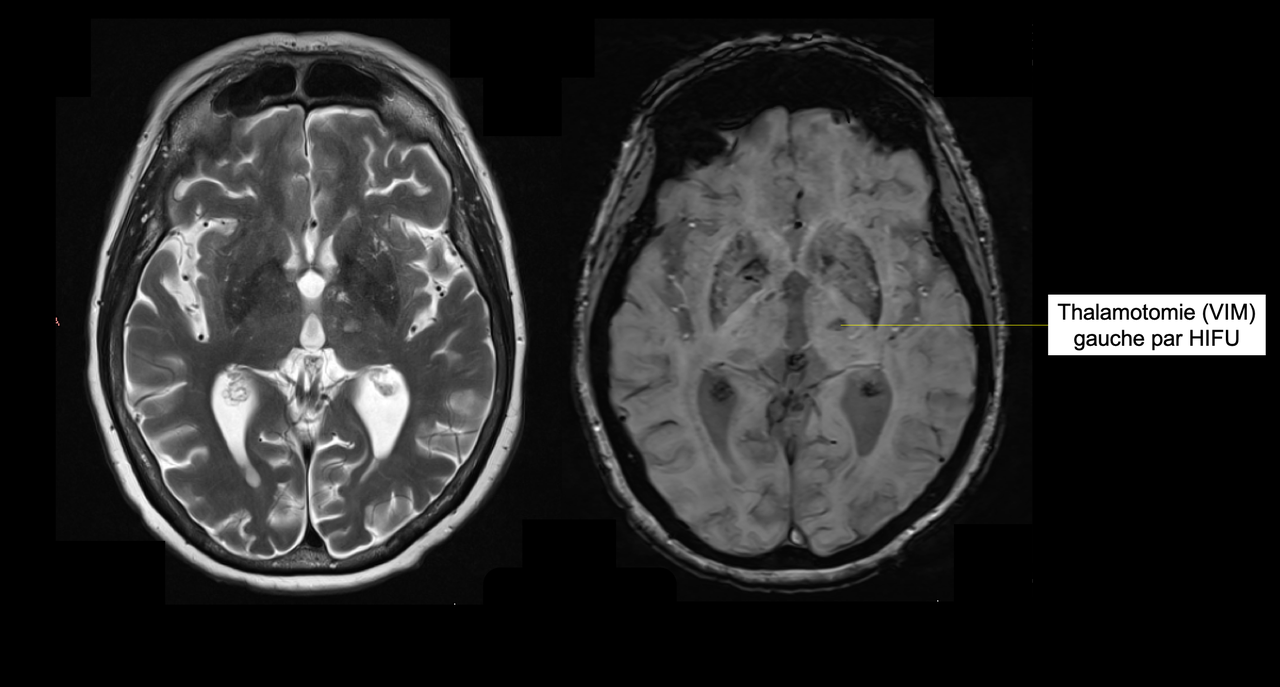 Horizontal section of the magnetic resonance that visualizes the lesion made in the ventral intermediate nucleus of the thalamus (VIM) by means of high intensity focused ultrasound (HIFU, High Intensity Focused Ultrasound). [Vanessa Fleury – HUG]

The results on the symptoms are immediate and very good, especially in essential tremor: “There is an improvement in the amplitude of the tremor between 50 and 80%. And an increase in quality of life of around 60% in the long term”, comments Vanessa Fleury. The patient’s condition stabilizes between six months and one year.

A person with tremors drew a spiral and a line before High Intensity Focused Ultrasound (HIFU) and right after: the hand no longer shakes. [Vanessa Fleury – HUG]

The pathophysiology of Parkinson’s disease is different and more complex: “Currently, the goal is still under discussion. Often the thalamus was attacked, as in essential tremor, but unfortunately in Parkinson’s the tremors recur with quite often “, specifies the doctor, noting that the new target could be the subthalamic nucleus.

The nature of the mysterious source of gravitational waves GW190521 questioned